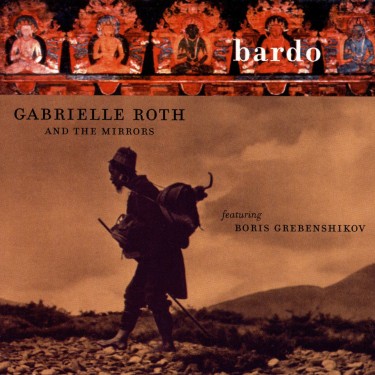 Transcendental, hypnotic music with the mystical language of the soul. Featuring Boris Grebenchikov, with a special guest appearance by Deva Premal and Miten. Released by Raven records on January 13,  2002

Boris Grebenshikov was a major contributor to Refuge, widely recognized as one of the best CD's by Gabrielle Roth & the Mirrors. Rob Ansell, Roth's husband, and Scott Ansell, his son, co-produced Bardo, Grebenshikov's second CD with Roth. This CD will have folks rushing to re-evaluate their discographies. This is stunning! Grebenshikov created a mythical vocal language -- a "bardo" -- just for this project. His vocals are a primary instrument in Roth's sound design. She has gathered a stellar supporting cast again. Her primary contributions to her own projects are as director, writer, and arranger (sound designer). Bardo is a deep biorhythmic set designed for meditation and healing dance rituals. Deep listeners will have the urge to get up and dance. The rhythms connect directly to the body clock and take over. Most of Roth's projects are unique, but this disc will appeal to fans ofMickey Hart and Byron Metcalf.
AllMusic Review by Jim Brenholts