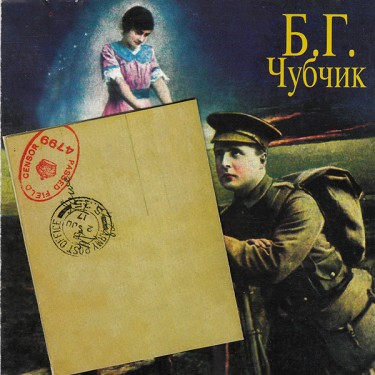 Tracklist:
1.Ratatouille
2.Heart
3.Shinkarevski Romance
4.Cats Have Four Legs
5.Little Forelock
6.My New York Time of Troubles
7.Black Crow
8.You Are My Sweetie
9.Little Loom
10.Clouds Hung Over The Town
11.Even If I Die Irreversibly
12.My Happiness

Boris Grebenshikov:
Everything started at DK Svyazi towards the beginning of 1992. Recording music for Victor Tikhomirov's film “Grass and Water” we were unable to refuse a request to write music for a cartoon “Mit'ki-Mayer.” The songs recorded there were forgotten for a long time, and when the recordings surfaced again they brought forth a hullabaloo (i.e. drinking under their influence wasn't half bad). The second installment included “Black Crow” and “My Sweetie” recorded at Fontanka at the time of Sands of Petersburg and Songs of Vertinsky. The third part arrived in the winter of '95-96 in Pushkinskaya Street Studios.  The temperature was below zero and the electricity kept going off; the clarinet went out of tune five times a song due to the cold. Let it be said directly: the conditions were heroic. But our enjoyment was likewise without limits.

As far as the third part goes—“Clouds,” “Little Loom,” etc.—one has to acknowledge its debt to the Mit'ki (for that matter, the first part also has a debt to them). The Mit'ki (i.e. Shagin himself) unexpectedly appeared in our studio one day with a request to record two or three old Soviet songs. We agreed for laughs, and, starting the attempt, discovered the general genius of these songs. Honestly, we became sorry to give away such splendor, and, bartering like we were in a market, kept “Clouds” for ourselves and gave them “Spring on a Riverbank Road” in its place.

There are those who heap blame on us for this album, but I continue to stand by it: unplug your ears and listen to it without bias. The people who composed these songs weren't fools, hacks or cynics; they also weren't blind to what was going on around them. True, these songs come out an epoch of our history that isn't loved by us, but any epoch at all is inhabited by normal people, people the same as us. And it's sincerely worth one's while to sing these songs, as it turns out that they're not about “then” but about “always.” And therefore, they're about all of us.